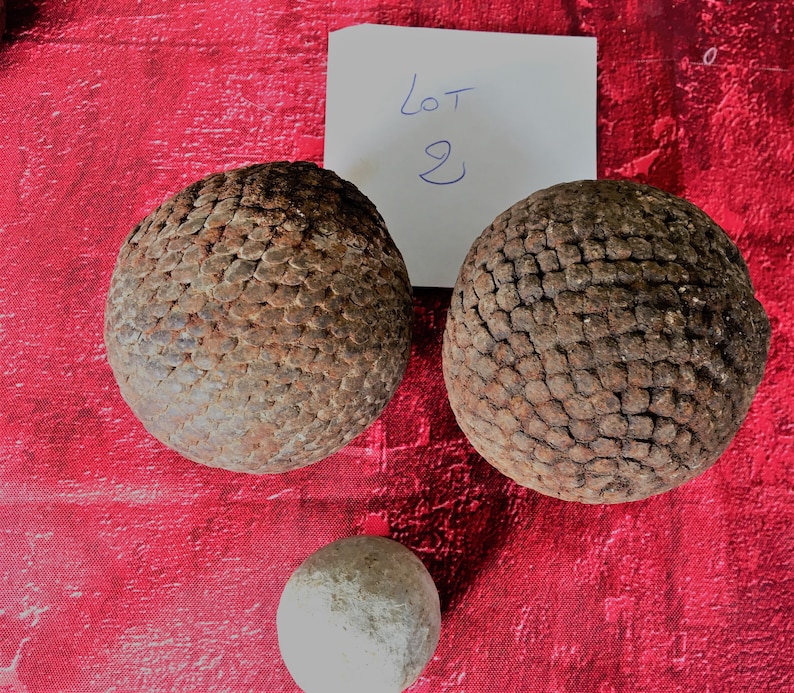 In the early 1900s, we played quot;Provencalquot; with studded balls, stronger than wood alone: ​​Tourtour, we played mainly in the rise of the church of Saint-Denis and the adventure was therefore perilous, in the midst of pebbles and earth, on a steep slope. These studded balls are now collectibles and have a certain market value because they have become very rare: for example, for a beautiful pair of studded balls (with colored nails and geometric patterns) it is necessary to count a minimum of 100 €. .. think carefully before discarding ...

Some historical and technical aspects will help us to trace this object typical of Provençal traditions.

From the wooden ball to the studded ball:

The history of the ball is naturally linked to the manufacturing possibilities of the time. Until the mid-nineteenth century, it was played with balls of boxwood, beech or elm. From time to time these balls were partially studded with nails to shoe, handmade.

But these wooden balls had a lot of flaws, they were worn out and deformed quickly, especially if the game was played on hard and stony ground.

From 1872 the nails were machine-made, which made their use possible for the manufacture of balls and had the advantage of protecting them from wear. The first balls were studded with iron nails with big round heads. As a result the balls were heavier and their diameters increased (100 to 150mm and the weight also up to 1500 Gr), especially for the balls of the game quot;à la lyonnaisequot;. Later, flat-headed nails were used. From there the manufacturers were real artists, the nails were in different materials (iron, copper, brass) which allowed to make several kinds of symbols, numbers but also stars, flowers, hearts, according to the wishes of the players (somehow quot;the coat of armsquot; of the bowler).
Nailing in scales:
Only flat-head nails made of steel, brass or copper were used. Nailing followed a spiral line. The second nail pushed into the wooden ball half covered the first nail and the next row. The last nail pressed was found in front of the first nail. By the shell nailing, the surface was perfectly smooth and completely hid the wood of the original ball. This way of nailing was used mainly for the balls of small diameter (70 to 90 mm) with which one played petanque and provencal game. One could only realize simple drawings like letters, initials and symbols.
Juxtaposed studding:
Used mainly for large diameter balls (90 - 110 mm). On the raw ball, we applied a model and for nailing we followed the line of this drawing. There were nails of different heads, square, round and flat, round and cylindrical or hexagonal. These nails were either copper, brass, steel. The nailing of a ball included nails all having the same shape of head. By the different materials, it was possible to make fantastic drawings. At Aiguines we stopped the manufacture of wooden balls in the year 1933.

1- Initially, we drove at regular distance, more or less nails in the wooden ball.
2- Then larger nails with half round head.
3- It was possible to make a drawing, in different materials, using square head nails.
4- For more complicated designs the cylindrical nails were used.
5- The wooden ball was entirely covered with nails with hexagonal head.
6- Nails with flat round heads, were suitable for more complex drawings.
Posted by Gilbert Giraud | Wednesday, February 3, 2010 | Updated on Wednesday, July 6, 2011

Whether connecting in the air, on the ground, or at sea, Intelsat solutions provide reliable and secure connectivity anytime, right where you need it most.

Commercial airline operators and business jet flight departments alike understand the importance of consistent, highly available connectivity needed for an optimal passenger experience. We enable billions of travelers to stay connected wherever and whenever they fly.

Government agencies trust Intelsat to ensure the success of every mission. With no-fail connectivity on land, across the sea, and in the air, our proven solutions are securing military intelligence and protecting those who serve. We are the essential partner in the deployment of next-gen applications—the partner that supports what matters most.

As hyper-connectivity becomes a global phenomenon with simpler, and more seamless communications required worldwide, Intelsat is creating solutions that can be delivered securely and reliably anywhere on the planet. By enabling continuous access to the platforms and applications customers rely on most, we help operators—even in the most austere environments—turn possibilities into reality.

The world’s leading media companies turn to Intelsat for secure delivery of content to every location, worldwide. As advances in technology expand opportunities to reach all audiences, we ensure secure and uninterrupted broadcast across new formats and platforms. With Intelsat as a partner, possibilities become realities.

Intelsat Professional Satellite Services include a variety of essential Space and Ground services that can take a commercial or government customer’s satellite from design and construction, through its launch, transfer orbit, in-orbit testing, and operations phases.

Learn how Intelsat and its partner Northrop Grumman are pushing boundaries in in-orbit satellite servicing technology and adding more value to our world-leading satellite fleet.

Whether virtual or in person, we are putting our technology to work to showcase all the ways our solutions help advance and secure boundless customer applications. Come connect with us!

Imagine the possibilities of what can be delivered, and how many more passengers we can connect, by bringing together the collective capabilities of Intelsat and Gogo Commercial Aviation.

Thank you for
subscribing to our blog.